Do you planning to go Mongolia?

Long tour package will provide free offering service on the below: 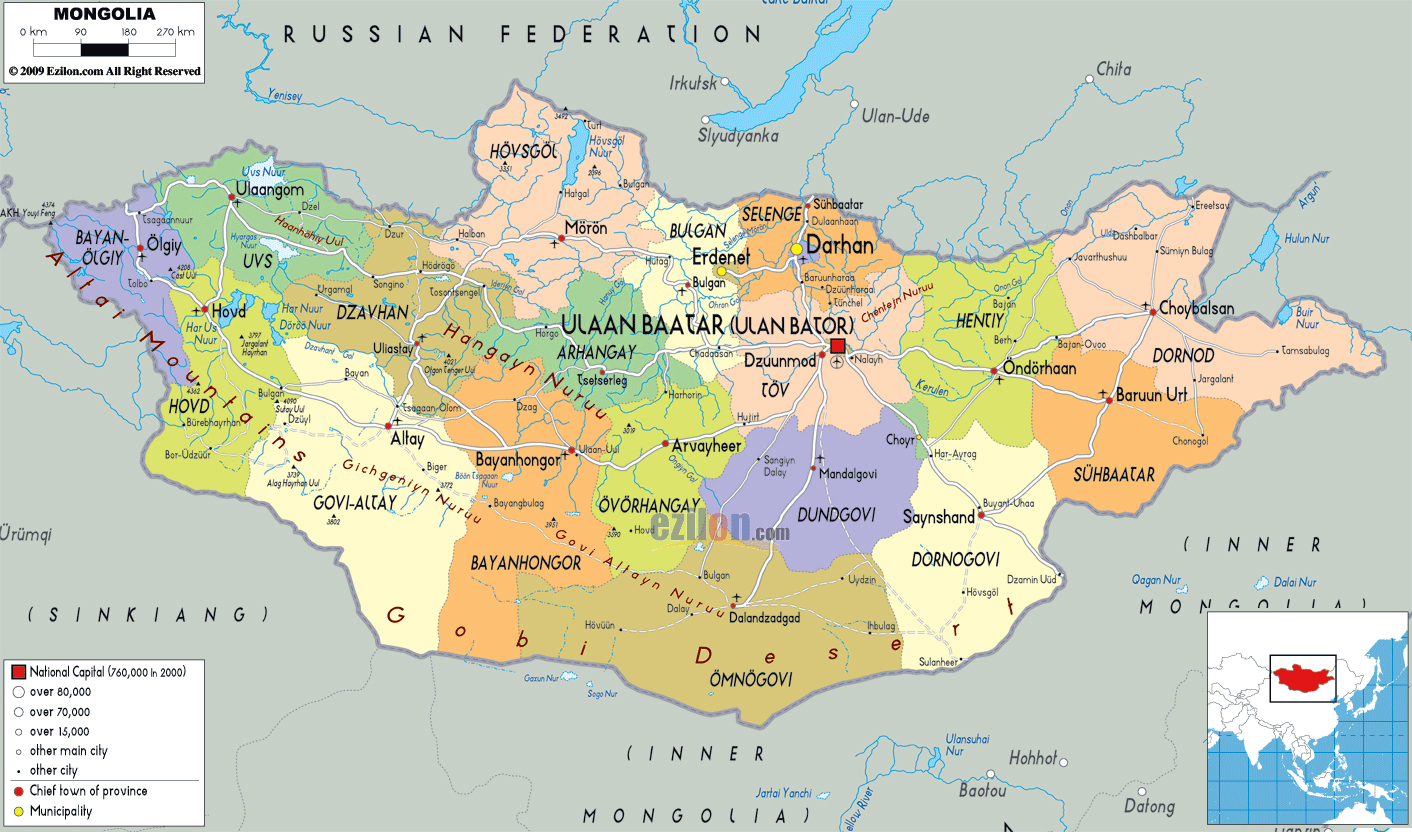 Ulaanbaatar capital city of Mongolia is located in the Tuul river valley and surrounded by the Bogd Khan, Bayanzurkh Khairkhan, Songino Khairkhan and Chingeltei Khairkhan mountains and elevated at 1,351m above sea level. According to official statistics in Mongolia, the population of the city was counted of 1,400,000 people which accounts for almost 50% of the total population of Mongolia. Ulaanbaatar is the cultural, political and financial center of the country.

The city has been changed its location 28 times, moving along the Selenge, Orkhon, Tuul rivers. In 1778, it was settled as a permanently at a present location. Since then it has been called Ikh Khuree.

In 1924, People's Republic of Mongolia was officially declared and then the city was renamed as Ulaanbaatar.

According to the new Constitution of Mongolia in 1992, It has been approved Ulaanbaatar is the capital city of Mongolia and the capital has its official flag and symbol.

Ulaanbaatar city is divided into 9 districts and subdivided into 152 small units of administration.

Ulaanbaatar city has numerous museums with world famous valuable exhibits and Buddhist heritage sites. One of the most famous tourist attraction is the Chinggis Khaan square and located at center of Ulaanbaatar.

Ulaanbaatar has been developing into completely new modernized city and formed by numerous tall buildings in the last decades
Mongolia is located in Plateau of Central Asia between Russia and China. Mongolia covers an area of 1.566.500 sq.km, which is roughly the size of Western Europe in which has immeasurable huge grass of steppes, sand dunes, rocky and forest Mountain ranges. The country is mountainous with an average altitude of 1580 meters above sea level, which makes Mongolia one of the highest countries in the world.The lowest point is Hoh Nuur depression at 560 meters above sea level and the highest point is the Khuiten peak at 4374 m. The geography of the country is characterized by great diversity. From the north to the south, it can be divided into 4 areas: mountain forest steppe, mountain steppe and, semi-desert and gobi desert In contrast to most visitors' expectations, much of the country's territory is mountainous.
Mongolia has an extreme continental climate with long, cold winters and short summers. The country averages 260 clear sunny days a year, so in this reason Mongolia is called “land of blue sky”.The precipitation is highest in the north, which averages 20 to 35 centimeters per year, and lowest in the south, which receives 10 to 20 centimeters . The extreme south is the Gobi, some regions of which receive no precipitation at all in most years.

Average temperatures over most of the country are below freezing from November through March and are about freezing in April and October. The average summer temperature is +20c (+65F). Winter is -20c (-13F). The wind is 1.5-4.5m/s. The average rainfall is 200-220 mm.

The mean temperature falls below freezing for seven to eight months of the year (See Table 3. 1). For two or three months in summer, the weather is warm and pleasant and relatively hot in the southern Gobi region. Winter usually lasts from mid-October until April, with the coldest period being between mid-December

All rivers and freshwater lakes freeze over in the winter, and smaller streams commonly freeze to the bottom.

Mongolia's weather is characterized by extreme variability and short-term unpredictability in the summer,Although winters are generally cold and clear
Population of Mongolia is 3,1million people /official statistic of gov/org in 2016/.Only 30% of population is living as a nomadic way.

The largest group in Mongolia is called khalkha,The only 6%of the population is Kazakh ethnic group who lives in far west side.There are other 20 ethnic groups included in the population. Its small population compared with Mongolia's vast geographical size makes the country the least densely populated nation in the world.The average population density is 1.5 per sq.km, in the southern Gobi it is as few as 0.3 per.sq.km.

The most population 95% speak Mongolian and the official language is Mongolian which is the most popular around Mongolia. Since the 1944, the Russian Cyrillic alphabet has been introduced to Mongolians and after 1963 it is been officially written in Mongolia ,however the traditional Mongolian alphabet is gradually being reintroduced. A Russian was commonly spoken widely in the past,however after communist regime collapsed the language is not influenced anymore instead An English is getting more popular among the population in recently.
Historically, Mongols had been practicing the shamanism and worshipping the Blue sky.However,Tibetan Buddhism is gained more popularity since it has been introduced in 16th century.Tibetan Buddhism shares the common aspect of Buddhism and getting more popular among the population of Mongolia.Until the beginning of the 20th century,Mongolia had hundreds of Buddhist monasteries and about 30% of all men were monks.Suddenly,in the 1930-s Mongolia had anti-religious compaign led by Communist rulers that nearly destroyed the extensive system of monasteries.

Under the communist rule,the non religious idea was promoted and monasteries were closed besides thousands of monks were killed as a victim of communist system.

But after 1990, democratic revolution was changing whole social life in Mongolia and allowed freedom of practicing religion in Mongolia. However 40%of Mongolians are belonged to non-religious group and still half of the population follows Tibetan Buddhism whilst some follow Muslim and Christian community.
Mongolian history begans 40,000 years ago from nomads herding in the Central Asian steppe to the formation of the powerful Mongol Empire and gradual emergence of the Mongolia,its history was very popular and it was conflicted all around Mongolia.

Ancient Mongolian states. The first Mongolian State was established in 209 BC by Huns or Hunnu people.The Hun's first king was Modun Shan Yui,whose father was the leader of the Huns most influential tribe.

The Huns territory stretched from Korea in Far East to Tian Shan mountain in northern China and from the southern section of the Great wall to lake Baikal in the southern Siberia.

From 200 B.C to 98 AD till its collapse of the Hun state was the most powerful nomadic nation dominate> in Central Asian steppe and territory.

But after 300 years of domination,State of Huns were collapsed into several other clans and these group of clans had continued to success on their own at Mongolian territory.

These clans were called Sumbe state,Toba,Nirun,Turkig tribes and then Uigar tribe then became the most powerful in Central Asia,but still they were unable to dominate the whole of Mongolia.It was the Kidans, who had peacefully living with several previous ruling tribes and took over Mongolia completely in 907.Their dominance lasted until the 12th century when a number of tribes had to attack them and divided into few different tribes.

Finally,Temujin whose father was the leader of tribes and after his father poisoned by enemies ,he gradually established Great Mongol State in 1189. After long battle in his life he made to unite 81 different Mongolian tribes and established the Great Mongolian Empire in 1206.At this time Chinggis Empire stretched from Asia to Europe and became population of 100 milion.

After he died in 1227,his descendants were taking over the state.During the 13-14th centuries,Mongolia developed in terms of its economy,culture ,military base and politics.It was a huge empire ,which extended by many separate Asian and Europian nations.

During this time the Mongolian Empire was the most powerful nation on earth and Chinggis khan was the great leader of whole Mongolia and respected as a national hero.

The Great Mongol Empire began to fall apart in 1368. Since then Mongols were invaded by a few rulers such as Manchurians conquered Mongolia in 1691 and then Manchurian colony had been lasted for 220years. By the beginning of 20 century Mongolians were raising up for national liberation and it worked in 1911 and spiritual ruler Bogd khan was leading the country until 1921 when the socialist revolution ,known as People's revolution took over power from him.Since then Mongolia is maintained strong link with former Soviet Union and the socialist era continued until democratic revolution in Mongolia in 1990. After 1990,Mongolian young democracy has been spreading around the Mongolia.

Mongolia is now gradually been developing into free market economy.
Nomadism and Buddhism is the two most important influences in Mongolian culture.While most Mongolians are now settled into town and cities ,large number of people are still living in gers /traditional round wood and felt tents designed for the nomadic style/.

The most popular traditional sport is Mongolian wrestling known as bukh combined with horseracing and archery and the most popular celebration is Naadam festival.

Nomadic life. Mongols have been living as nomdic way for several hundred years now.Its ancestors inhabited a huge area of Central Asian territory and herdsmen moving from one place to another searching for better pastures for their animals. The longest period they stay in the same pasture is between October and April. Every nomadic family has a winter place with shelter made of stones and wood . Usual daily activities of nomads are all to do with herding their livestock and converting their raw materials into processed food ,clothing such as ready to use or eat things like cashmere ,wool,meat milk and producing various type of dairy products.One third of Mongolians are nomads and live far away from each other.Most Mongolian nomads herd horses,camels,cattle,sheep and goats.The horse is the most important of the five animals.

Mongolian Clothing. Mongolian traditional dress is called the deel.There are several different types of deel.Celebration costume is the most colourful and made of valuable silk and worn usually wear in the Naadam festival, Mongolian new year and some of nomadic ceremonies during the whole year
Mongolian food is influenced by the country's herding tradtion based on dairy products and meat.There are different types of food mostly they eat during the day. It will included on below:

Various kind of vegetables are introduced recently such as potatoes ,carrot ,swede, cabbage and onions.

Economy . We are traditionally based on livestock breeding, agriculture, and mining industrial.

Mongolia has a rich source of ground deposits such as copper,coal,gold, molybdenum,uranium and other varios deposits and much of them are exported to neighbour China.The country has among one of the largest copper reserves in the world with the Oyutolgoi reserve calculated to be world's largest copper and gold reserves in the world. Moreover , Tavan Tolgoi the world's largest untapped coal reserve is also major attraction among the business makers as well.

Politics. After decades of communist rule have ended in1990,Mongolia is ruled by a mixed presedential and parliamentary system.The president acts as the head of state and chief of the armed forces,and direct to appoint the prime minister to the cabinet who led majority party in the parliament.

The Prime minister appoints a cabinet that must be approved by the State Great khural.

The parliamentary election is held every 4 years.

Local government. Mongolia is divided into 21 regions,known as aimag with capital city.